‘Europe’ means nothing to Gianfranco Rosi, the maker of Il Sacro G.R.A. He nevertheless gets down to the root of the matter with his film about the forgotten life of the Grande Raccordo Anulare, the ring road around Rome.

On 8 September 2013 Gianfranco Rosi stepped on a high-speed train to Rome with a Golden Lion, which he had won the previous evening, dangling in a plastic grocery bag. The conductor recognised him from television, which was a new experience in Rosi’s life: ‘Mr. Rosi! Congratulations! Maestro Bertolucci is also here. Could I please take a picture of the both of you?’

‘When you are able to arrange it, I will certainly oblige’, was Rosi’s answer. He had met Bertolucci for the first time the previous evening on the victory stand in Venice and it seemed inappropriate to thrust himself upon him. Especially now.

The conductor functioned as a trait d’union, and lo and behold: Bertolucci was willing to receive the maker of Il Sacro G.R.A. – The Holy G.R.A., a play on words referring to both the Grande Raccordo Anulare, the ring road around Rome, and the Holy Grail.

The word ‘receive’ is quite apt, as Bernardo Bertolucci has been tied to a wheelchair for the past seven years because of a neglected hernia. And that is the way he had announced the prize the previous evening: from his wheelchair dressed in a smoking. With his typical oblique smile jury chair Bertolucci said: ‘And the Golden Lion goes to Il Sacro G.R.A. by Gianfranco Rosi.’ A loud ‘oooooooh’ went through the crowd, because it was the first time in history that the Golden Lion of Venice, the oldest film prize in the world (1932) after the Oscars (1929), was awarded to a documentary. Because it is not a documentary according to both Bertolucci and Gianfranco Rosi himself. Il Sacro G.R.A. is poetry, is art. In Italy the discussion still rages.

Thus Rosi followed the conductor to where Bertolucci was sitting: ‘He was also sitting second class! That totally won me over. When he saw me his eyes swelled up, as did mine. “My boy”, was all he said. We embraced and talked for a while and yes, the conductor could take his picture. Strange thing was that Bertolucci proved to have seen all my work, whereas I hardly know his. I am not a fan of fiction. We had one important thing in common and that was our editor, the best one in the world, Jacopo Quadri. Thanks to Jacopo Bertolucci had seen my other four films. And I am sure that this is the reason I have won the prize. Would this have been my first film, I would not have received it.’

Gianfranco Rosi (1964) not only does not like fiction, he is not a big fan of life either, in the sense of beaten paths, career, suburban bliss and a settled home. He was born in Ethiopia as the son of an Italian banker, grew up in Rome and Istanbul, left for New York in 1985 to start his film education and since then has wandered around the globe in search of himself, only to recognise himself in the outsiders that are to be found all over the world. It is the same in the no man’s land surrounding Rome’s ring road, where Rosi lodged for three years, moving from a bed breakfast of one of Il Sacro G.R.A.’s most peculiar characters to a camper between the sheep, to the crumbly banks of the Tiber river, to a deserted parking spot with two aging transvestites vainly hoping for clients.

‘Your view on mankind is Franciscan’, Bertolucci had told him on the train. Thanks to pope Francesco a Franciscan view is now very in vogue in Italy. It means something like: respecting the value of each life with compassion and without judgment. Rosi is very willing to comply as long as it is not from a Catholic point of view, because he’s not a fan of that either. ‘This pope is trustworthy, because he is a human being. The others gave me bubonic plague. I could not listen to them for one second. I can listen to him, because you can feel that he is sincere. Not that his words are very original, but the fact that he says them is what counts. Apparently people need someone who can make the obvious sound new. I am fine with that.’

Do not go up to Gianfranco Rosi and start talking about a connecting thread between his characters. There is no connecting thread; these people are living along Rome’s ring road, period. Italo Calvino best describes what he is searching for. Rosi enthusiastically recites from the heart: ‘Truth manifests itself the moment you turn around and what you just saw is no longer there.’

Catching the moment of truth is Rosi’s quest. He does not want to know in advance what he is going to find. He selects by intuition, by contact. The only stipulation is time, infinite amounts of time that he invests in being somewhere, not as a cowardly journalistic fly on the wall, who only takes without giving, but as a participating human being. That is the work preceding the images, he shoots himself with a 35mm camera. No camera crew for Rosi, no soundman, no production manager. No one except himself. ‘The moment I start shooting I know that it is the right moment. For me to be able to know it is crucial to spend a lot of time with someone before the camera comes into play. At that moment I do not have to beg for trust, I already have it.’

The comparison to La grande bellezza, the worldwide Italian hit heading for an Oscar, is inevitable. Rome and humanity, seen from two totally different viewpoints, might draw interesting parallels.

Rosi does not oppose, but it is quite clear that it is of no particular interest to him: neither La grande bellezza nor the comparison. ‘The Rome of La grande bellezza is a central swamp in which twenty-five thousand people can afford to live and make a nuisance of themselves. Surrounding it is a periphery of three million people who are completely ignored. They lead a forgotten existence. They are the “vinti”, the vanquished, which is not the same as losers, mind you! Their power lies in the fact they do not complain. It would serve no use, as there is no communication between the central swamp and the Saturn ring of Raccordo, which surrounds the swamp. Seventy kilometres of ring road and an entire invisible city lying in between.’

‘Twenty thousand bodies on the Mediterranean seabed. That is Europe for me’

Rosi is convinced that this situation applies to all historic European cities and that you can shoot the same film about ring roads around Amsterdam, Budapest, London or Paris. Rome however is exemplary, because the difference between the drab existence surrounding the G.R.A. Moloch and the breathtaking beauty of the swamp, also known as the cradle of western civilisation, is more poignant than anywhere else.

‘… und nur unter der Porta del Popolo war ich mir gewiss, Rom zu haben’, wrote an overjoyed Goethe in 1786 to friends in Germany. It took him two months, in a carriage over the Brenner from Karslbad, defying many dangers along the way, but he succeeded in ‘Rom zu haben’. Goethe’s entry under the Porta del Popolo is majestic. The surrounding Roman campagna with its rolling hills, herds of sheep and ancient relics is the overture to the highlight of the Grand Tour: Rome, the essential stage in the upbringing of well-off scions of the European and American upper classes.

Today, in 2014, if one wants to experience this anachronistic Grand Tour-feeling you have to go past, under or over the G.R.A. with its kilometres of surrounding sad urban periphery. It would be best to go blindfolded from the airport to your hotel in the centre, in ‘the swamp’.

Gianfranco Rosi likes the idea, but does not agree with it. For him it is all about the things we do not want to see, but that do exist. These are the things he lovingly and poignantly films: the non-lives of the vanquished who do not complain, but silently carry on at the fringes of the cradle of our shared civilisation.

‘It took a lot of convincing before Gianfranco decided to take up this project’, says Marco Müller, former director of the film festivals in Rotterdam (1990-1992), Locarno and Venice and now at the helm of an unlikely film festival in Rome that never really took off as it is a political obstacle between right and left. Müller is in Rotterdam on a short visit to see how the wind blows and has known Rosi since his first film Boatman from 1993, about a fisherman on the river Ganges.

‘We all knew that this G.R.A. project would be perfect for Gianfranco. The idea came from the urbanist Niccolò Bassetti, who had studied the architectonic and antroposophic landscape surrounding the Roman ring road for years. Gianfranco has this enormous talent, but it takes years to get him to budge.’

Initially Müller was very disappointed that he did not get Il Sacro G.R.A. for his struggling festival in Rome, but he came round as soon as he learnt that it totally unexpectedly had won a Golden Lion.

‘I am greatly indebted to Marco’, says Rosi with a smile on his face, as they wave to each other from afar. More Italians approach Rosi in Rotterdam with texts such as ‘are we allowed to greet the Golden Lion or don’t you recognise me anymore?’

‘It is so funny’, says Rosi, ‘a Golden Lion doesn’t mean anything. I have to start from scratch again. No money, a lot of pleading. Oh yes, Europe was the question? Well, this is Europe for me.’

On his phone he shows a series of photos taken on the island of Lampedusa, covered as it is with shipwrecks of wooden fishing boats. A photo of a macabre football pitch with a wall of stacked wrecks in the background pops up. ‘That is where the children of those who survived can merrily kick a ball about, with a view on their own hell’, says Rosi, ‘twenty thousand bodies on the Mediterranean seabed. That is Europe for me. But I am not sure whether I will make this film. A lot of things have already been made about Lampedusa. And I have to find my own story in it. So far I have not discovered it yet.’ 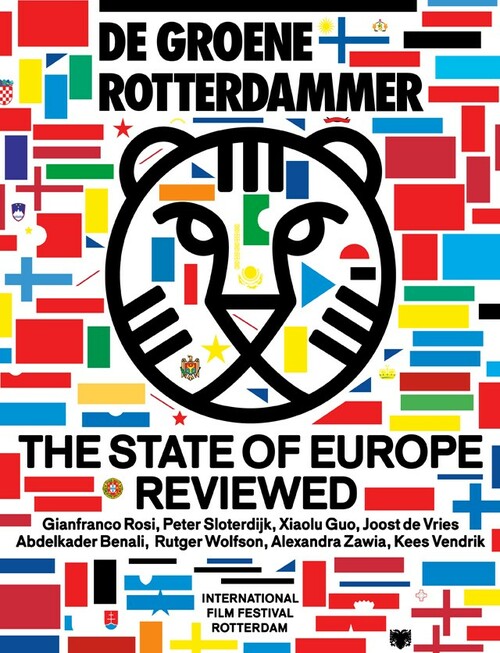