An e-mail conversation with Dave Eggers

When did you first learn about Zeitoun’s story and when did you decide to make a novel out of it?

At McSweeney’s we publish a series of books called Voice of Witness, designed to bring attention to human rights crises using oral history. The first book we did was about wrongfully convicted (and later exonerated) prisoners in the U.S., many of them on Death Row. The second book in the series was Voices from the Storm, which allowed New Orleanians to tell their stories before, during and after Hurricane Katrina. There were thirteen narrators in that book, and Zeitoun was one of them. In that book, we only had only 8 or 9 pages about Zeitoun, but his story intrigued me. There were so many fascinating and bizarre aspects of his experiences; what happened to him seemed possible only in that certain moment in time, this intersection between the worst natural disaster in American history and the War on Terror. But aside from the political aspects, there was also the story of this all-American family that happened to be Muslim. It seemed a good time to depict the everyday normalcy of a family like the Zeitouns. When I first met the family, they were so warm and funny, and Kathy and Abdulrahman’s own backgrounds and marriage - to say nothing of their experiences in Katrina - seemed worthy of a book. It had an epic scale, and a seemed a prototypical story of an immigrant’s life in America. The Zeitouns have lived the American dream, but that dream turned, briefly, into a nightmare.

Zeitoun is written very poised, very controlled - at the same time it has a certain moral outrage. Was that the intention? Was it difficult the contain yourself while writing?

Well, I really wanted the story to speak for itself. That’s why I don’t insert any of my own commentary; inserting my opinions seemed unnecessary, and might have even dulled the impact. There’s that old saying, “Show, don’t tell” when it comes to writing, and I observed that pretty faithfully here. Instead of ranting about the Bush administration’s terrible failures during and after Hurricane Katrina, I thought it better just to tell one story that demonstrates those failures, and the nightmarish political climate at the time, through one man’s story.

What do you think is the biggest benefit of telling someone else’s story - whether it’s Zeitoun’s or Valentino’s - through your writing?

When it comes to these vast and complex episodes in history, like the war in Sudan or Hurricane Katrina, sometimes we learn the most - and certainly empathize most - by seeing that moment in history through the eyes of one person. That was the goal with Valentino’s story. During the civil war in Sudan, 1983-2005, it was made out to be so complicated in the mainstream media that there was worldwide inaction, and millions died unnecessarily. The same is happening in Congo now; the seeming complexity of the conflict has paralyzed the rest of the world. They simply don’t know where to act or how to stop the conflict. But through Valentino’s story - and with the benefit of hindsight - one can untangle the different threads of the conflicts in Sudan and see it more clearly. Taking that approach, I took a cue from many other books that sought to do the same thing - allowing readers to understand sociopolitical upheaval better from the ground level. The book that most people in the U.S. read about the Vietnam War, for instance, is Tim O'Brien’s The Things They Carried. The books we know best about WWII are arguably Catch-22 and The Diary of Anne Frank - both with very intimate lenses through which we see those incredibly complex and seemingly unapproachable moments in history.

Over the years your work touches on several genres - the memoir, the novel, the hyper-funny short short story, the adaptation of a children’s book, etc. Is that diversification something that just happens as you go, or is it something you plan in advance?

Hmm. I don’t know if it was intentional to work in so many forms, but I do like trying new things, and I do get restless with form. To become passionate about writing a book - and you have to be passionate, given it might take many years - I have to be interested in both the subject matter and in the form. Thus with a book like What Is the What, I spent years researching it but couldn’t finish it until I solved the problem of its form. For three years I fiddled with it, but couldn’t crack the formal problems. It was dry and full of holes until I allowed myself the freedom to write dialogue and breathe life into scenes that had been skeletal - all of which necessitated calling it fiction. Zeitoun’s story was a bit easier, in that most of it takes place within a few months, and Zeitoun could remember everything clearly (whereas some of Valentino’s memories were less comprehensive). But I do think I like to try new things. After the last seven years, which were spent on these biographies, I’m writing fiction again, and enjoying the freedom immensely.

You debuted with a memoir; your books after AHWOSG seem to be everything but autobiographical. Is that intentional? 5

That is intentional, more or less. I feel like I said most of what I needed to say about myself in that first book, and I had had enough of my own voice and my own story. Just as many writers have to tell their own stories before they can tell others, I needed to get all that out of the way. But I’d had enough of my own story at that point. Since then, it’s become clearer than ever that there are a million stories more interesting than mine.

7 My favorite short story from How we are hungry is ‘When they learned how to yelp.’ To me, it feels like a striking description of a generation’s first contact with a aggression they had no idea could possibly confront them (especially the girl in the library, watching a grainy video on the internet). Was that something you personally felt?

That was indeed the genesis of the story. The girl in the library was named after a former student of mine, Chinaka Hodge. I imagined someone like Chinaka, so young and hopeful and perhaps innocent, watching one of those videos of the terrorists beheading someone, and I imagined that it would provoke a sound unlike any other before it - something involuntary, unprecedented, something that formal language couldn’t express. Thus the yelp. During the darkest years of the war in Iraq, there were so many atrocities committed by all sides, so many unspeakable acts, that almost every day I found myself physically sickened. There are so many unforeseeable atrocities that come with war, and could not have been imagined by unimaginative and historically amnesiac minds like those of Cheney and Bush.

Perhaps a suggestive question: but is that yelping still going on, or have people gotten numb to it by the endless repetition in the media, movies, etc? And is that something you want to address as an author?

I think we do become numb, of course. But there are times when we’re awakened again. The beheadings awakened people, because they were so intimate and raw, whereas we’re accustomed to seeing the same sorts of photos every day, of markets just after a bombing, with debris spread everywhere, mothers grieving. We are again in a state of numbness, though. There is a certain relentless sameness to much of the coverage of the wars in Iraq and Afghanistan. We need to hear more from the people on the ground, from the people living the war every day. Only when we listen to the individual stories of the witnesses can we wake up again, and it’s incumbent upon us all to do whatever we can, every day, to stay awake.

Your later work, Zeitoun especially, seems to be influenced by William T. Vollmann (Am I correct?) What other writers do you read profusely?

I’m a great admirer of Vollmann, and have had the pleasure of publishing his work many times. But our writing styles are really different. There are so many writers I admire, and it seems the ones I like most are those whose styles are very different from my own. Saul Bellow has always been my favorite novelist, though there’s very little evidence of his influence in my own work. Lately I’ve been digging back into the work of writers who were journalists first, and then came to write novels - Orwell, Didion, Hemingway, Dickens. I started in journalism, too, and I think it’ll invariably influence how I write and what I write about.

Final question, how is Toph doing?

He’s great. He’s grown up now, 26 years old. He lives in Los Angeles, and was just up here last weekend for the holidays. He’s also like you Dutch - very tall. He would feel very much at home with you, and you would guess him to be Dutch. 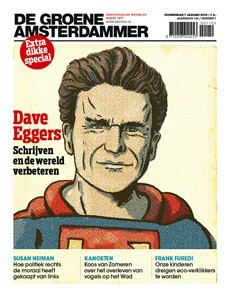